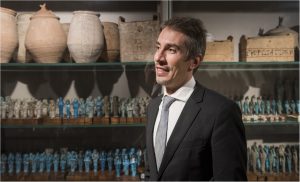 Born in Arzignano (VI) in 1975, Christian Greco has been Director of the Museo Egizio since 2014. He managed a refurbishment of the museum building and a renovation of its galleries, completed on March 31st 2015, whereby the Museo Egizio was transformed from an antiquities museum into an archaeological museum.

While at the head of the Museo Egizio, he has set up important international collaborations with museums, universities and research institutes all across the world.

Greco is also a dedicated teacher. He taught Greek and Latin at high school in the Netherland for many years. His most recent courses focused on the material culture of ancient Egypt and museology and were held at the Università di Torino e Pavia, the Scuola di Specializzazione in Beni Archeologici of the Università Cattolica del Sacro Cuore in Milan, the Scuola IUSS in Pavia. He is also featured as a lecturer in many master programs on Museum Management and Communication, where he shares his work and research experience.

Fieldwork is particularly prominent in Greco’s curriculum. For several years, he was a member of the Epigraphic Survey of the Oriental Institute of the University of Chicago in Luxor. A long-time member of the archaeological mission to Saqqara of the Rijksmuseum van Oudheden, in 2015 he became co-director of the expedition and brought the Museo Egizio back to the field after a long break.

Greco’s published record includes many scholarly essays and writings for the non-specialist public in several languages. He has also been a keynote speaker at a number of Egyptology and museology international conferences.

Since 2015 he has been a member of the management board of the MANN (Museo Archeologico Nazionale di Napoli).

The 2019 exhibition of the Museo Egizio is called InVisible Archaeology, and focuses on how modern techniques and technologies can reveal information, details and aspects of the material culture that have been so far undetected, and can therefore open new important directions of research.