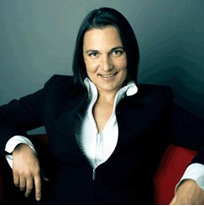 Sabrina Baggioni is 5G Program Director of Vodafone Italia since September 2017. She joined Vodafone Italia in 2000 as Head of Business Development and over the years held various roles, always focusing on innovation, from the world of online and digital to that of international roaming. In a few years he became the first responsible of integrated communication services for companies, and then Marketing Director of the Enterprise world (2006-2014), leading to the launch of the first convergent offer in Italy, which is why he was called to England by the Vodafone Group to lead implementation also in other markets. Previously he worked in the consulting world for Monitor Deloitte (from 1992 to 2000) first in London, then in Abu Dhabi and finally Milan, managing projects and clients at an international level, and mainly dealing with strategy, internationalization and product portfolio. Graduated in Management and Business Administration at the ‘Luigi Bocconi’ Commercial University, she specialized in Business Administration and Internationalization at the Wharton School of the University of Pennsylvania. She graduated in piano from the Giuseppe Verdi Conservatory in Ravenna.

Keynote title: 5G potentials for Tourism and Education in the Cultural Heritage domain